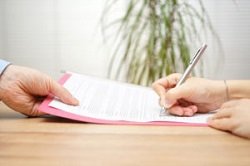 New York State’s Durable Power of Attorney is a document in which a person referred to as “the Principal” can designate another person or persons referred to as “Agents” to act on their behalf with respect to all business and financial matters.  A Power of Attorney, in most cases, is effective when signed and contrary to the beliefs of many, there is no requirement that the Principal be incapacitated or unable to handle their own affairs in order for the Agent to act.  Once the document is signed both the Principal and the Agent have the power, concurrently, to transact all business that the Power of Attorney allows.

In New York, a change in the law occurred back in 2010 which required that the form signed be statutory and also make provisions that the gifting power be dealt with in a separate rider referred to as the Statutory Major Gift Rider.  Prior to this change, the power to gift was not separated and if you wanted to grant that power to an agent you simply initialed the appropriate box.  What many of our clients and some practitioners were unaware of was that the gifting power deals with more than the traditional concept of gifting.  Where an agent wants to transfer any asset out of the name of the principal, he or she does so using the gifting power.  For that reason, the gift rider becomes an integral part of many asset protection plans.

To illustrate, consider a situation where a husband and wife own a home jointly and one of them suffers a catastrophic illness, which requires the need for Nursing Home care.  The well spouse can likely engage in crisis planning (despite the five-year look-back for Chronic Medicaid) which will protect all of their assets.  Part of this plan would be to transfer the home and any assets that were either joint or in the sick spouse’s sole name to the well spouse.

While you would be able to transfer the joint assets without the use of the gift rider, you would need the rider to transfer the home and the assets owned individually to the well spouse.  Absent the gifting power in the document, you may be facing a situation wherein you need to seek Guardianship to have the power to make the requested transfers.  This is only one example of how the gift rider may be important in a time of crisis.  A Power of Attorney is an important document, if you are unsure of whether you have the full gifting power in your documents we would advise you to have them reviewed by a professional who practices in this area.