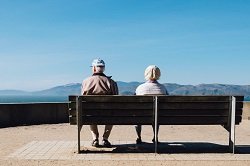 Question:  My dad died. He was remarried and survived by a wife and two children from that marriage. I’m a non-marital child.  There is no last will and testament.  I think he owns some property in his own name but everything else is joint with his wife.  What happens now? What rights do I have?

The next logical question then is: what assets are subject to intestate distribution?   Generally, they are any assets the decedent owned in solely the decedent’s name without any designated beneficiaries.  Thus, any assets that were owned by the decedent and someone else are not assets subject to intestate distribution. As an example, if your father had a bank accounts jointly owned with his wife and a house solely owned his name that was sold for $550,000, the property distribution would be: his wife would automatically own the bank accounts, his wife would receive $300,000 from the sale of the house ($50,000 plus one half of the balance of the assets) and the you and your half-siblings would each receive approximately $83,000.

Also, it is important to mention that as a non-martial child, you may have to prove that you are your father’s child in order to inherit from his estate.  If your father didn’t sign your birth certificate, a Court approved paternity or a DNA test are some of the things that would be sufficient to establish paternity.